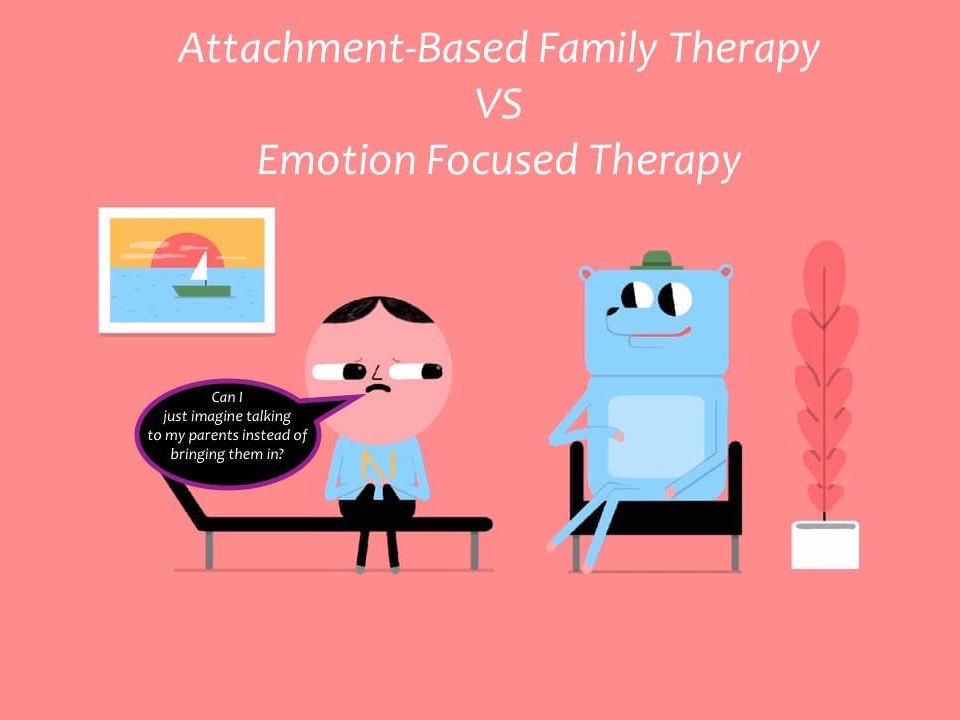 A fascinating study recently came out, which compared the effectiveness of 10-week sessions of two evidence-based therapies, “Attachment-Based Family Therapy” vs “Emotion Focused Therapy” (Diamond, Shahar, Sabo, & Tsvieli 2016). For many of us psychotherapy geeks, this is pretty darn cool, as they are two phenomenal approaches. The study was specifically geared towards young adults who held unresolved anger toward a parent.

Without knowing much about the two approaches, what do you think would be more effective in reducing a young adult’s unresolved anger toward their parent? 1). Attachment-Based Family Therapy (ABFT), which is an approach where the therapist works with the young adult and his or her parents in the same room, face-to-face? Or 2. Emotion Focused Therapy (EFT), which is an individual therapy, where the therapist helps the young adult process their emotions using various interventions, such as an imaginary dialogue (empty-chair)? In other words, the therapist helps the angry participant use their imagination, and in an experiential manner, share with their parents their unresolved feelings of anger, sadness, etc., as well as imagining a reply back?

The researchers hypothesized that “ABFT would facilitate more productive emotional processing, as actually speaking directly to one’s parent is more likely to arouse emotions and associated unmet attachment needs than simply imagining a conversation with one’s parent.” Although it was hypothesized that ABFT would be more efficacious, the study demonstrated that, “both treatments led to significant and equivalent decreases in unresolved anger, state anger, attachment anxiety, and psychological symptoms.” The only difference between the two approaches was ABFT “was associated with decreases in attachment avoidance”. In other words, in the ABFT sessions, the young adults increased their interactions with their parents, which makes sense because they were all in the same room together. There were no follow-up data, so we do not know if there were an increase of interaction after sessions were completed.

What I find interesting (and apparently so did the researchers), is that EFT was just as powerful as ABFT, in decreasing the young adults unresolved anger, state anger, attachment anxiety and psychological symptoms. There were many reasons for this. While the therapeutic relationship and processing emotions were key in therapeutic gains, the study also points to the power of the imagination.

Although the article did not discuss the imagination as a curative factor, in my opinion, the study points to its importance and wonderful ability to create shifts in one’s intrapsychic distress. The study demonstrates that the brain does not care if the emotional processing is done face-to-face with one’s family, or if it is within one’s imagination. The brain considers both to be real. For example, think about a ferocious lion that has escaped a local zoo and is now in the parking lot as you are going to your car with your small child. Experience what happens to your physiology and thoughts. Even though you are just thinking about the event, in your imagination, I bet you are having all kinds of very real responses because of it (although some might feel excited as they think about naively petting the big, cutesy, kitty cat). Whether it is in reality, or fantasy, the brain, or better yet, our mind-body, reacts the same.

I have written elsewhere concerning imagery work (Karris, 2015). Imagery is an intervention used by therapists for many psychological issues, such as trauma (Arntz, Sofi, & Breukelen, 2013; Barry, 2012; Shachar, 2010; Van der Hart, 2012), adult relationship problems (Barry, 2012), self-criticism, and shame (Gilbert & Irons, 2004; Gilbert & Procter, 2006). Although extremely rare in the Emotionally Focused Therapy (couples therapy) literature, S. M. Johnson (2004) demonstrated the use of compassionate imagery with a wife who was prone to self-judgment and had difficulty trusting her husband. Instead of needing to create a perfect nurturer, the therapist used ‘‘her angel’’ (p. 315), which was the wife’s grandmother. Experiential engagement with the internalized image of her grandmother became a turning point in her ability to soften and move closer to her husband. The current ABFT/EFT study (along with dozens of other studies), demonstrates the power of EFT and imaginative empty chair work, to decrease negative emotions and increase one’s overall well-being.

I can imagine, years down the techno-road, therapists will use virtual reality programs, specifically for clients seeking to resolve their “mommy and daddy issues.” Psychologists are already using virtual reality with veterans suffering from PTSD. For example, one modality is called, “Virtual Reality Exposure Therapy,” where trained clinicians take veterans who are suffering from PTSD through virtual realities similar to their original horrific memories. As the veteran visualizes the experience, shares their story, and processes their emotions, they move towards healing and integration. There will come a time when virtual reality will be used for empty-chair work. The client will answer some questions, upload some photos, and then voilà, the journey begins. The client puts on the headset, is then able to see his or her avatar parent in the virtual chair, and engage in transformative dialogues to deal with unfinished business. Fast-forward a few decades, clients will be hooked up to machines, enter into vividly the original painful memories, and have a reparative interaction with an AI parent or deity.

Activity: (If you experienced abuse of any kind, I do not recommend you try this activity alone, as it is best done with a therapist)

Place two chairs in front of each other. Sit in one chair, with your eyes open or closed, and imagine your parent sitting across from you. What does your parent look like? What are they wearing? Notice what your feeling in your body as you think about them. Take a deep breath and begin to share with your parent what is on your heart. Let them know how you feel (anger, sadness, fear, etc.). It might feel awkward at first. If it is too painful, be kind to yourself, stop the activity, and if you want, try again at another time. If you are not overwhelmed, continue to share with them how you feel. Then, share with them what you needed from them (i.e. “I needed you to hold me, to tell me you loved me and that you were proud of me,” or whatever comes to mind). If you are daring enough, switch seats. Imagine you are now the parent. Begin to share what you think your parent, in their best and healthiest self, would say to you. Switch seats again. Now share with them what it was like to hear that. Journal about your experience. Even better, share it with someone you love and trust. I would also love to hear about your experience.