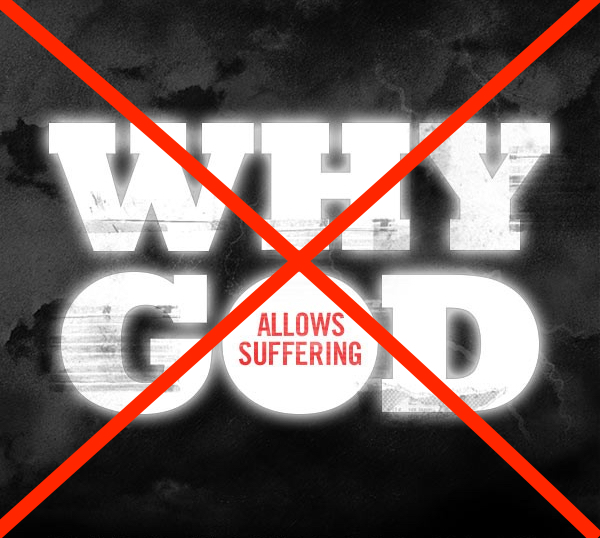 Trusting God has always been a peculiar and difficult feat for me. What made it worse was envying those spiritual elite, who boldly and confidently declared they trusted God with all of their heart, mind, soul and strength. I thought they were supernaturally strong, specially called superhero disciples, and I was a weak, wannabe side-kick disciple, who would forever long to obtain the superpower of being able to fully trust God.

What magnified my inability to trust God was asking myself on repeated occasions the difficult question, “What can I trust God for?” I then asked myself questions such as, “Could I trust that God would never allow me to get into a terrible accident, losing both of my legs?” “Could I trust God that He wouldn’t allow me to die in a horrific bombing?” “Could I trust God that I wouldn’t be betrayed by a good friend or by an unfaithful partner?” “Could trust that God wouldn’t allow my future child to be murdered?” “Could I trust God not to get cancer and die a painful death?” I came to the stark realization that I couldn’t trust God for any of the above things not to happen. I concluded, “If God allowed those terrible things to happen to passionate Christians of devout faith, on a regular basis, then it could potentially happen to me.” Therefore, I could not give my heart fully to God, because God could not be trusted. I also began to have negative thoughts that crept up on occasion, which were difficult to share with others, even with myself: “God was downright cruel, and even monstrous, for allowing such evil and suffering to occur.”

My heart has softened lately. I am learning to experience a childlike faith again and it feels refreshing. Do you want to know what has been a catalyst for this renewal? I have recently come to the conclusion that “allow” is a terrible theo(il)logical word, especially in relation to theodicy.

The word “allow” is poison to the sensitive God-seeking soul for two reasons: first, it makes God out to be a voyeuristic monster who arbitrarily jumps into time, willfully intervening in some people’s lives to save them from harm, and willfully choosing not to intervene in others (what is monstrous is that even though God could intervene, God chooses not to). For example, God watches a disgusting, psychopathic man, begin to rape a helpless woman, and says to Himself, “Ah, I planned this before the foundation of the world, I could stop this but I am going to allow and permit it to happen for a grander purpose.” God, although all-powerful, just watches and does nothing to stop it. Then, in the next moment, God watches another psychopathic man, in another region of the world, attempt to rape another helpless woman, but this time says, “Ah, I planned this before the foundation of the world, I will intervene and stop this man from raping her.” Immediately, God intervened and stirred a neighbor’s heart to go over to her house to see how she was doing. The perpetrator became startled, frantically ran out the door, eventually getting arrested at a nearby gas station.

It is no wonder people are aghast at this kind of arbitrary and allowing God, especially a God who they think is 1. In control of the world, 2. Is powerful enough to stop any evil act from happening, and worse, 3. Preordains these type of events to occur.

Secondly, the word “allow,” assumes God could have done otherwise. Going back to the rapist example, it assumes God could have taken His big metaphysical index finger and flicked the rapist away, or acted like Quicksilver in X-Men: Days of Future Past and at the speed of light manipulate objects or other people, so as to keep the woman from harm. As we will see shortly, there are problems with this kind of interventionist God.

Although I am still working out my see-through-a-glass-darkly-theodicy, after reading Thomas Jay Oord’s The Uncontrolling Love of God (2016), I am convinced that the word “allow” needs to be thrown out of Christian vernacular. I have come to a deeper realization that God does not “allow” evil events in our lives (or “orchestrates,” “plans”, or “wills”, them). To say God allows evil events to occur means that God could do otherwise and that is just not the case. Why? Because, God can’t do otherwise. That is right. Contrary to popular belief, there are things God cannot do (e.g. God can’t lie). One of the things God can’t do, which is important for this discussion, is unilaterally control people and events (Oord, 2016).

Oord writes succinctly, “mermaids cannot run marathons because a mermaid’s nature includes leglessness. God cannot create controllable creatures because God’s nature is uncontrolling love” (p.148). Oord also makes it clear that a loving God created a world where God’s agency competes with other variables, such as randomness, creaturely agency, and lawlike regularities. Thus, it is not that God allows evil or horrific events to occur, rather, it is impossible for God to control people and events, thus enabling all kinds of free creatures (e.g. humans, bears, snakes, etc), randomness (e.g. I am reminded of a true story of a hockey player hitting a puck so hard, it killed a little girl sitting in the stands on her birthday), and lawlike regularities (e.g. gravity, weather systems, etc.), to run amok. Evil events occur precisely because God is not in control of all things. After much reflection, I realized I can blame people, my own choices, the snake for biting me, demonic forces and systems of oppression, randomness, and lawlike regularities, for evil and/or horrific events, but not a loving uncontrolling God.

Just because God is not controlling does not mean that God is passive. As I have written elsewhere (Theology of Evil & Suffering), God is in control, just not like we think. According to the Oxford dictionary, the word “control” can mean “the power to influence or direct people’s behavior or the course of events.” God is in control by inviting, empowering, inspiring, filling, convicting, leading, comforting, challenging, and loving us. God is lovingly influencing every quark, person, creature, planet, and universe, towards ever increasing experiences of shalom. God weeps alongside those who suffer and never lets evil have the last word, whether in this life, or the life to come. God is still very powerful and loves to redeem, deliver, and heal, although it is in cooperation with free creatures and not done unilaterally (e.g. “your faith has healed you” Matt.9:22).

Many Christians, agnostics, including some atheists (who ironically aren’t supposed to believe in God), look at this world and want a different God than the one who exists, particularly a God who doesn’t allow evil to occur, or eradicates evil all together. I am not sure they would be happy if their wish was granted. A God who unilaterally controls events, or stops time to move people out of the way of car accidents, or kills people on the spot who are about to murder others, or never allows human beings to get hurt or suffer, is a controlling and authoritarian Puppet Master, and an all together different God, whose very nature and character is uncontrolling love.

Getting rid of the word “allow” has freed up internal energy, which was used to keep my cognitive dissonance and doubt at bay, and is now used to propel me to lovingly, passionately, and almost wholeheartedly embrace a prodigal God (I use the word “almost” because trusting God is more of a journey rather than a destination).

God is a Spirit, and God is love, and is always doing the most loving acts possible in every moment, in every nook and cranny of existence. God can be one hundred percent trusted because God would never purposely or maliciously harm any person, especially for some grand Machiavellian purpose. That is a grand revelation and no small proclamation. I am convinced that the above type of trust can be experienced with more freedom and gusto if one embraces an uncontrolling loving God.

So, please Christian, stop saying things like, “Oh, Betsy, God allowed your husband to die in that car accident for a reason. We just don’t know it yet.” Stop attempting to cheer up traumatized parents saying, “God allowed your baby to die for a reason. It is all in God’s loving plan.” Get rid of the word “allow,” and stop giving people a reason to be confused, and worse, give them reasons to falsely blame God for the horrific events that occur in their lives. Doing so will prevent an unnecessary obstacle from getting in the way of people being able to have a loving connection with their Creator.

May I sure a few words with you spiritual seeker. I get it. I wouldn’t want to love, or be loved by, an allowing arbitrary God either. Yet, I encourage you to reflect further. When you think about the abuse, pain, suffering, or flat out evil in your life, did God really cause it? Or did another person with free-will cause it? Or did an unfortunate and random event cause it? Or did you cause your suffering due to the choices you made as a human being with free-will? I suspect, after some reflection, you will realize that a loving, freedom-giving, uncontrolling God, did not have anything to do with it. Where was God? Suffering with you, and doing everything in God’s uncontrolling power to redeem, heal, and stop subsequent evil.

Seeker, I am sorry Christians have confused you saying that God is in control of everything. That is just not the case. You know instinctually that coercion and control is not very loving, which is why God whose very nature is love, does not control us or every event that occurs in the world. If you want a beautiful picture of the character and nature of an uncontrolling God, then look at the life of Jesus. I assure you, Jesus hates evil and suffering as much as you, and as you read in the gospels, did everything that he could to stop it, without controlling others, including giving his own life.